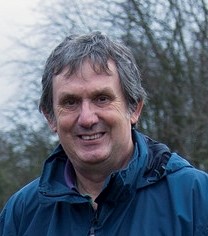 I retired from work in July 2015, after a long career in the NHS, and, although involved in some charity work already, was keen to be involved in areas completely unknown to me previously.  My local community newspaper, the Shire, had an article about A Forgotten Landscape which was just commencing and sounded quite extraordinary in the length and breadth it was covering. There were two workshops which were being advertised, one involving Oral History, the other which required volunteers for the Coming Home to Roost project. The latter was a workshop led by the inestimable Ed Drewitt, a local eminent naturalist who’d conducted an early morning bird watch at my local nature reserve, Lamplighters Marsh, which had been an absolute revelation.

So, I attended the two day workshop, at the Pilning Wetlands Reserve, which consisted of an education in bird identification, the local habitat, counting technique, and the basis of the project.  We went for a walk along the area between the two Severn bridges which consists of salt marshes where many wading birds come to roost at high tide. We learnt the use of a telescope and binoculars and it was remarkable seeing the many and varied species of bird present, and to have the facility of counting the numbers fairly accurately. Pilning Wetlands Reserve is a newly created nature reserve consisting of several manmade lakes on the former army shooting range. Paul Bowerman, a local naturalist, helped create this with the new owner of the land, and they have the ability to manage the water levels of the lakes to attract migrating birds.

The project covers bird roosts along the Severn estuary from just north of Avonmouth to Oldbury, and I was lucky enough, along with a couple of other volunteers, to be given the New Passage and Northwick Warth roosts to monitor. These are the aforementioned salt marshes, just north of Severn Beach. A Forgotten Landscape have loaned us a telescope for the duration of the project and I can’t say how much of a pleasure it is to visit the sites each month and it’s something I shall continue long after the project has ended.

I also mentioned the Oral History workshop. This was a fascinating experience and I immediately realised I wanted to be involved. So far I’ve interviewed seven people who’ve lived and worked in the area all their lives. They vary from dockers and workers at the smelting, the two biggest employers in the Avonmouth area to someone involved in the construction of the Oldbury Power Station. My next interviewees are people who have lived and worked in Lawrence Weston all their lives, since its creation postwar. I can’t wait.

You can hear some of John’s oral history recordings here.